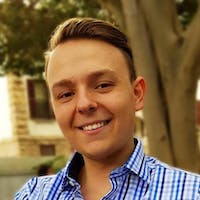 Building interfaces that are accessible to everyone has always been a bit of a black box to me. I do know, however, that not enough apps on the web are built in an accessible way.

Thankfully web standards include a lot of ways that you can make apps accessible. It can be complicated, though. And you can't always tell whether or not you've built something accessible.

One method that has changed how I build my interfaces is using getByRole from React Testing Library instead of getByTestId.

There are also a few more accessible queries exposed by DOM Testing Library, but we'll focus on getByRole.

If you use getByRole as much as possible, over queries like getByTestId, you will write more accessible code.

In our example, we have a todo list item that you can toggle checked by clicking on the checkbox. Try it out for yourself:

If you try to focus on the checkbox with your keyboard to mark the task as completed you'll see that you can't. And it won't work with a screen reader either because we don't have any accessible labels in our UI.

Instead of trying to figure out how to make it accessible by studying the WAI-ARIA spec, let's try and do it using tests!

You can clone the repo to follow along, or just read further.

Then, run the tests in watch mode:

Our test doesn't test whether the app is accessible - it just tries to find an element (a div in our case) that has a specific data-testid prop.

Tests using getByTestId don't test accessibility. But we can change our tests to help us build accessible UI.

We're going to make our app more accessible by taking a TDD approach: first rewriting our test to use getByRole, then changing our code to make the test pass!

Instead of querying for the checkbox by testId, we're going to query it by an accessible role:

This will try to find an element on the page that has identified itself as a checkbox.

You can find the role that best describes the interactive element you want to test by going through the full list of roles here.

You'll now see that our test fails. That's because our current element is just a div. DOM Testing Library even gives us a list of possible accessible elements on the page to help us along:

Using getByRole forces you to have accessible elements in your UI.

Let's start by adding a checkbox input element to our Checkbox component.

Use native HTML elements as much as possible to make life easy. You will have to deal with overriding browser styling, but the upside is that you get accessibility out of the box.

Next, instead of relying on the div's onClick event, we'll use the checkbox's onChange event:

Our test is now passing again!

But we now have an ugly checkbox breaking our design. 😢

So let's add some CSS to fix this.

We also need to remove the default margin that comes with the checkbox, and add overflow: hidden to .checkbox so that the checkbox isn't clickable outside our circular design:

Finally, now that our checkbox input is fully covering our custom checkbox, we can hide it:

Now we're back to our old design and behavior, and our checkbox is (almost) accessible. Try tabbing to it and hitting the spacebar to toggle the checked state:

I say it's almost accessible because someone using keyboard navigation instead of a mouse can't see if the checkbox is focused. So let's add a focus state:

We're using :focus-within on .checkbox to apply a style to it if anything inside it is focused:

Always make sure your UI can be navigated using a keyboard. Accessible HTML elements help but make sure you include focus states if you override the default browser outline style.

Finally, we want to label our checkbox with something meaningful so that screen readers can tell the user what the checkbox is for.

We can either add a <label> element, or we can use the aria-label prop. Since we don't want our label to be visible, we'll go for the latter:

To make the label as helpful as possible, we're showing a different label depending on whether the task is checked.

We can now modify our test to find a checkbox with that label, to make sure our label is set. To do this we pass a name parameter to our getByRole call:

Make sure your UI has helpful labels that can be used by screen readers. Query your elements by those labels in your tests to make sure they're there.

But we need to find it by a different label depending on whether the checkbox is checked or not. We can refactor things a bit to make this easy.

And here is our final, accessible UI:

What did we improve here in our test?

How getByRole makes your tests resilient to changing code

Because we are now testing our code in a way that it will be used (find a checkbox input), rather than the way it's built (find an element with a specific test ID), our tests are more resilient to refactoring.

If we completely changed how our UI was built, even if we removed all our UI altogether and just kept the checkbox input, our tests will still pass.

I recently refactored a form from React Hook Form to Formik, and all my tests still worked, even though the underlying code was totally different. Plus, because of how I wrote my tests, my form was completely accessible!

If you're interested in testing and accessibility, I am planning on releasing a bunch more content about it. Enter your email address below to be notified when I release new content.